Which of the 50 states has the most religious population? Since there are many ways to define “religious,” there is no single answer to this question. But to give a sense of how the states stack up, the Pew Research Center’s Forum on Religion & Public Life used polling data to rank them on four measures: the importance of religion in people’s lives, frequency of attendance at worship services, frequency of prayer and absolute certainty of belief in God. Mississippi stands out on all four, and several other Southern states also rank very high on the measures.  States with sample sizes that are too small to analyze are combined. As a result, the lowest ranking is 46 rather than 50. 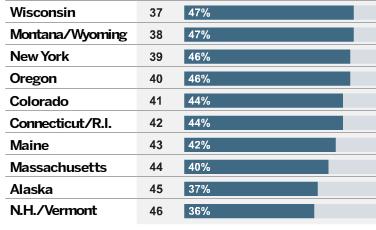