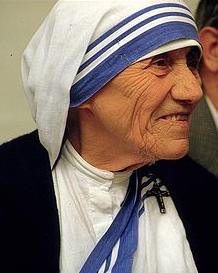 WASHINGTON — An anti-religion group is urging its members to write complaint letters to the U.S. Postal Service over the upcoming issuance of a stamp to honor the late Mother Teresa.

In a press release, the Freedom From Religion Foundation asserts that Mother Teresa, a nun who won the Nobel Peace Prize and international acclaim for her decades of relief work among the impoverished of Calcutta, India, should not be honored because she is a religious figure. While Mother Teresa was Catholic, Hindu leaders have applauded the stamp decision. Rajan Zed, head of the Universal Society for Hinduism, called it an honor to all of India. Mother Teresa was born in Albania and spent most of her life in India but was given honorary U.S. citizenship in 1996, a year before she died.

Pacific Justice Institute has clashed with the FFRF before. In the last year, the FFRF has sent numerous letters to local governments in California and elsewhere threatening to sue over public invocations, and PJI has countered with legal opinion letters supporting prayer and free speech.  Last October, the FFRF filed suit challenging federal and state tax laws that provide tax exemptions for ministers’ housing allowances. PJI represents ministers who would be affected by that suit.

PJI President Brad Dacus commented, “Just when you think the atheists and anti-religionists have run out of things to complain about, they attack Mother Teresa, one of the great role models of the last century. We are encouraging anyone who has been inspired by Mother Teresa to join us in writing letters of appreciation to the U.S. Postal Service to counter the ridiculous complaints they are receiving from the FFRF.”

Pacific Justice Institute will be sending a letter to the USPS offering legal support for  the Mother Teresa stamp. Comments may be sent to the Postal Service via its website, www.usps.com.  Citizens may also write to the USPS at either or both of the following addresses: