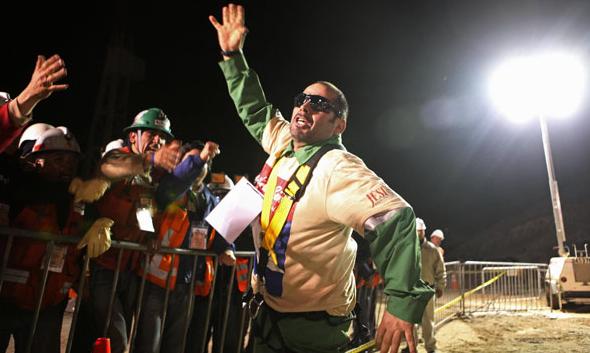 The entire Chilean trapped miner episode and their rescue  is filled with stories of their faith and God working miracles.

One of the trapped miners of the Copiapo Chile mining accident has been Jose Henriquez who is an evangelical Christian.  He used his phone call time to request a pastor.  That pastor request fell upon Marcelo Leiva, of Vallenar Baptist Church in Vallenar, Chile who has become a spiritual representative for the whole family camp during the ordeal.   Pastor Leiva had only 10 minutes on the phone and he used that time to pray with Henriquez and provide words of inspiration.   It seems like their prayers were answered as all the miners came out safely and two miners dedicated their lives to Christ during the entrapment.

Pastor Leiva has been able to minister to the families in the rescue camp as well.   He helped one of the miner wives turn her turn her life over to God.   Time Magazine reports that there has been an outpouring religious songs and hymns being sung in the camp and has reflected a church-like atmosphere at times.  Pastor Leiva also wrote down a special Psalm for the Chilean Mining Minister.  Henriquez’s brother has helped spread the faith of the miners from the surface.   His brother printed t-shirts with the scripture verse from Psalm 95:4.  It read, “Thank you Lord.” On the back are the words, To Him be the glory and honor. Because in his hands are the depths of the earth, and the heights of the mountains are His.”

One of the more vocal voices of faith in mines has been of Jimmy Sanchez.  He wrote of faith and of God in his letters to the outside world above.   Sanchez said “There are actually 34 of us, because God has never left us down here.”   His words are reminiscent  of the Bible story of the three Jewish men, Shadrach, Meshach and Abednego, sent to the Babylonian furnace but were not burned and were seen with a divinely sent forth person there protecting them.

Sanchez also made this interesting observation,  “But for me it’s like it was yesterday that we got caught here. God wanted me to stay here, I don’t know, maybe so I change from now on. I have thought and I’ll change a lot. I have suffered too much and don’t want to suffer any more. In the hard moments I was thankful of God because I got a daughter. I expect than when my turn arrives everything will be ok. Hugs for everyone.”

Upon rescue the most famous and media celebrated miner was Mario Sepúlveda who was the first to speak to the media.   Mario came out dancing and hugging everyone.   Mario yelled out to the cameras, “I was with God.  I was with the  Devil.  God and the devil were fighting over me and God won.  I always knew they would get me out. I always had faith in the professionals here in Chile and in the Great Creator.”   People are already naming him super-Mario.

Another miner, Carlos Mamani. Came out and immediately went down on his knees, motioning to God he began to give thanks.    Carlos, is the only non-Chilean member of the trapped mining crew with his homeland in Bolivia.   He told reporters that he is not planning to return to Bolivia but rather stay as close to his new miner family as possible.

Omar Reygadas exited the rescue capsule with his Bible.   Like Carlos, he too knelt down and offered thanksgiving to heaven.   His words were “God Lives.”

Everywhere you look you can see the words of thankful men and grateful family members who attest to God’s help in this terrible tragedy with a happy ending.