WASHINGTON, D.C.—Nearly half (47%) of Americans who consider themselves part of the Tea Party movement say they are also part of the Christian conservative or religious right movement. On many important political and social issues, Americans who identify with the Tea Party movement also hold views similar to the views of Americans who identify with the Christian conservative movement, according to findings from the new American Values Survey (AVS) released by Public Religion Research Institute today.

The national survey asked Americans about their views on a range of economic, social and religious issues, and the upcoming elections.

“PRRI’s American Values Survey found significant overlap between the Tea Party and the Christian conservative movement,” said Dr. Robert P. Jones, CEO of Public Religion Research Institute. “Our findings challenge, more than they confirm, the conventional wisdom about the religious makeup and attitudes of Americans who consider themselves part of the Tea Party movement.” 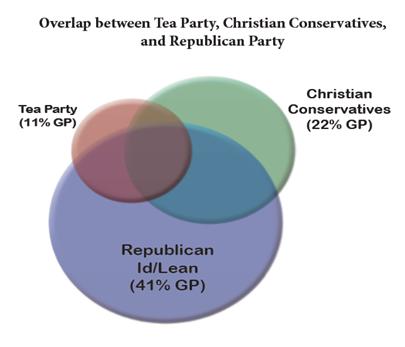 Other key findings from the survey include:

• The survey confirmed several attributes of the Tea Party movement. Compared to the general population, they are more likely to be non-Hispanic white, are more supportive of small government, are overwhelmingly supportive of Sarah Palin, and are much more likely to report that Fox News is their most trusted source of news about politics and current events.

• But the survey challenged much of the other conventional wisdom about Americans who consider themselves part of the Tea Party movement:

—Nearly half (47%) also say they are part of the religious right or conservative Christian movement. Among the more than 8-in-10 (81%) who identify as Christian within the Tea Party movement, 57% also consider themselves part of the Christian conservative movement.
—They make up just 11% of the adult population—half the size of the conservative Christian movement (22%).
—They are mostly social conservatives, not libertarians on social issues. Nearly two-thirds (63%) say abortion should be illegal in all or most cases, and less than 1-in-5 (18%) support allowing gay and lesbian couples to marry.
—They are largely Republican partisans. More than three-quarters say they identify with (48%) or lean towards (28%) the Republican Party. More than 8-in-10 (83%) say they are voting for or leaning towards Republican candidates in their districts, and nearly three-quarters (74%) of this group report usually supporting Republican candidates.

• Nearly 6-in-10 (58%) Americans favor a policy that provides a future path to citizenship for undocumented immigrants who have been in the U.S. for several years. Three-quarters of Americans also say immigration reform policies should be decided at the national level.

• Over the past five years, significantly more Americans report their views have shifted on the issue of rights for gay and lesbian people than on the issue of abortion (25% and 14% respectively).

The American Values Survey (AVS) is a large, nationally representative public opinion survey of American attitudes on religion, values, and politics. The 2010 poll is the third biennial AVS, which is conducted by PRRI every two years as the national election season is getting underway.

Results of the 2010 American Values Survey are based on telephone interviews conducted by Public Religion Research Institute among a national random sample of 3,013 adults (age 18 and older) between September 1 and September 14, 2010.

The full survey report and topline questionnaire can be downloaded from the PRRI website.

Public Religion Research Institute is a non-profit, nonpartisan organization specializing in research and education at the intersection of religion, values and public life.