WASHINGTON, D.C. – A strong majority (60 percent) of Americans say that society would be better off if the distribution of wealth were more equal. A new major national survey finds that majorities of every religious group and religiously unaffiliated Americans agree on this point; however, there are large partisan, ethnic, and generational disagreements about the distribution of wealth in society.

The 2011 American Values Survey — a large annual survey exploring important issues at the intersection of religion, values and politics—highlights American attitudes on equal opportunity and inequality, the Mormon question in the 2012 election, and attitudes about the Obama presidency.

“We are witnessing the emergence of a generational fault line over what constitutes a good society,” said Dr. Robert P. Jones, CEO of PRRI. “Seven-in-ten of the Millennial generation believe that society would be better off if the distribution of wealth were more equal, while a majority of seniors disagree.” 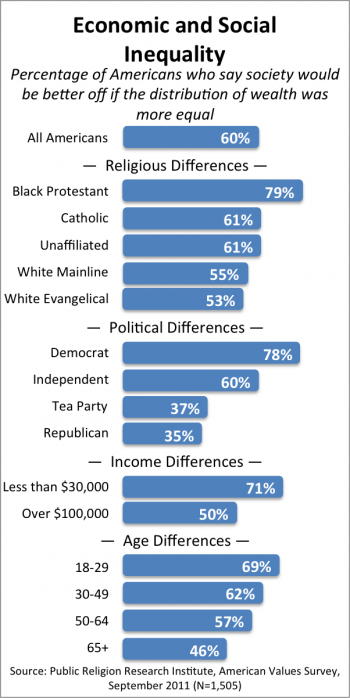 “Despite the considerable attention paid to Romney’s Mormon faith, most Americans are still unaware of his religious identity, with one important exception: white evangelical Protestants have become significantly better informed about Romney’s faith since mid-summer,” said Daniel Cox, PRRI research director. “Within this period, Romney’s favorability among white evangelical Protestants has fallen significantly, from 63 percent in late September to just 49 percent currently.”

There are large divisions in American society on the issue of equal opportunity. A majority (53 percent) of Americans believe that one of the biggest problems in the country is that everyone does not have an equal chance in life. Four-in-ten Americans say that it is not really that big a problem if some people have more of a chance than others.

A strong majority (60 percent) of Americans agree that the country would be better off if the distribution of wealth was more equal, while 39 percent disagree.

Seven-in-ten (70 percent) Americans favor “the Buffett rule,” a proposal to increase the tax rate on Americans earning more than $1 million per year, compared to only 27 percent who oppose it.

A significant number of Americans see the Mormon faith as different from their own.

Because few Americans currently know Romney is Mormon attitudes about Romney’s faith may not have fully impacted his candidacy.

Currently, among Republican voters who know enough about the candidate to register an opinion, Cain leads Romney in favorability (73 percent and 66 percent respectively), with Perry trailing at 53 percent.

Americans’ feelings about the Obama presidency are decidedly mixed.

When asked to voice the reasons for their disapproval of Obama’s job performance in their own words, Americans most frequently cite leadership qualities (41 percent) and his handling of economic issues (37 percent). Only about 1-in-10 (11 percent) mention personal qualities of the President or some other reason (9 percent), a category that includes foreign policy and immigration.

More Americans believe that President Obama, rather than Republican leaders in Congress, has a better idea about how to create jobs (44 percent and 35 percent respectively).