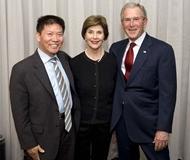 The small group was specially invited by former President Bush and his wife Laura to the kick-off event at the Winspear Opera House, followed by a dinner hosted by the couple.

During the meal, Fu had the opportunity for a long talk with President Bush about religious freedom and rule of law issues in China.

“I was honored to attend the kick-off celebration of the Bush Center’s Freedom Collection,” said Fu. “President Bush is a compassionate and unwavering advocate for freedom, especially in China.

“As he has repeatedly said, religious freedom and the rule of law will enhance both the stability of China and unleash the creative spirit of the Chinese people,” Fu added. “ChinaAid is privileged to work alongside President Bush as he continues to work for freedom around the world.”

President Bush also invited Fu and his delegation to a one-hour meeting Thursday morning during which they discussed issues ranging from the role of women in free elections to effective advocacy, as well as the nature of democracy and the importance of a civil society.

The Freedom Collection is a first-of-its-kind living repository documenting the continued struggle for human freedom and liberty around the world. Available online at www.freedomcollection.org, it uses video interviews to document the personal stories of brave men and women who have led or participated in freedom movements from the 20th century to the present day.

“Dissidents and political prisoners remind us that not even prison and oppression can silence the call for liberty,” said Mrs. Bush as she introduced a video documentary available on the site entitled “Why I became a dissident.”

The Freedom Collection provides inspiration and insight to the current generation of freedom advocates. It helps to combat the feeling of isolation that can be common among dissidents by sharing the stories of those who have gone before in the fight to be free. The Freedom Collection currently contains the interviews of 56 dissidents including former Czech President Vaclav Havel, His Holiness the Dalai Lama, Her Excellency Ellen Johnson Sirleaf, and many other dissidents from countries including Burma, China, Iran, Syria, East Timor, Cuba and Egypt. Fu’s interview is part of the collection. New content will be uploaded to the site weekly.

The Freedom Collection also includes a physical archive containing documents and artifacts from major freedom movements, including an early draft of the Tibetan Constitution given to President Bush by His Holiness the Dalai Lama, as well as a hand-written Chinese Bible used by house church Christians imprisoned in a labor camp.