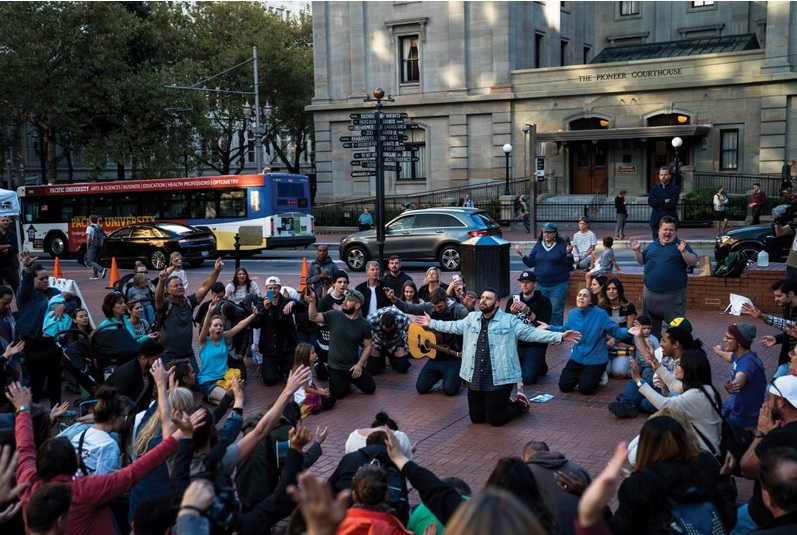 A two-phase, weeklong evangelistic effort that specifically targeted the Rose City took place last month, and its organizer said it was the start of something bigger for the whole nation.

“There’s a mighty move of God sweeping across the Northwest that will impact America,” evangelist Chris Overstreet said to thousands at the opening session Sept. 19 of his four-day Compassion to Action event at the Oregon Convention Center.

The large meetings followed two days of evangelistic outreach Sept. 17 and 18 in the city in a campaign called Flood Portland.

“There is a momentum of Heaven taking place in the Northwest,” Overstreet said. “We’ve had many people out sharing the powerful but simple Gospel, and it is changing hearts and lives.”

According to Jonathan Chandra of Overstreet’s event team, from 350 to 400 people fanned out from Pioneer Courthouse Square downtown to minister and pray for others. They were sent out to a wide range of locations throughout Portland.

“We gathered together, worshipped and sent out people,” said Chandra. “We encouraged them to love on the people and share Jesus. We also passed out free tickets for the night sessions (at the convention center).”

As those sessions began, about 6,000 had registered online and another 3,500 free tickets were distributed.

Overstreet recently moved from Redding to Camas, Wash., because of the calling he senses to reach the Northwest for Christ. He said the vision for the Portland effort came while he was involved in a 2016 evangelistic rally in Sweden. He said he stood in front of thousands of people and envisioned stadium events springing forth across America, and the first location he saw was Portland.

That same week, the annual Northwest Prayer Summit sponsored by Portland-area minister Aaron Winter’s Hearts of Fire International outreach took place in Portland, and at which nationally known prophetic minister Lou Engle stated that a forthcoming revival in the Northwest would touch the entire nation. Overstreet said he could literally feel the hearts and prayers from the Northwest. Winter’s event returns to Portland Oct. 25-27 (heartsoffireintl.com) with a focus on that anticipated revival.

Chandra shared several accounts from Flood Portland: “We got to share the gospel for the very first time to Mimihe, a young woman visiting from Japan. As she listened she responded in broken English, ‘The gospel is so simple!’ Her heart was moved to hear about the love of Jesus, that He would lay his life down for His people.

“We got to pray for Miss Oregon’s mom. The Lord moved powerfully and brought healing to her knee that was injured from a water skiing accident. “We prayed for a young man traveling from coast to coast who had just recently lost his mom suddenly. His mom loved Jesus but the pain of losing her left him questioning God’s goodness.

“We prayed for an older woman who identified as being Buddhist. She started weeping as we shared the love of Christ with her and prayed for Holy Spirit to reveal the truth of Jesus to her.

“We ministered to a young man who was visiting from Atlanta. He was appreciative of our prayers and words of encouragement.

“We got to share the gospel for the first time to four high school-aged boys at a bus stop. They listened intently and said they wanted to come to the conference later this week.”

For more go to www.portland2018.com