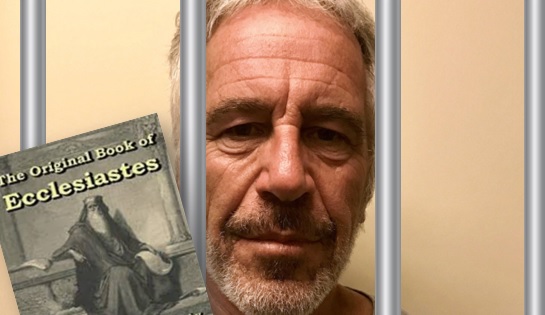 Billionaire Jeffrey Epstein just made the case for the Jewish Bible book of Ecclesiastes. In Ecclesiastes we read of an account of one of ancient history’s richest men, King Solomon, and his brutal confession of the failure of his wealth and power. The vanity of riches, popularity and prestige provides the repeated theme of the book.

Jeffrey Epstein made millions, owned an island, lived in one of the largest homes in Manhattan and regularly socialized with the greatest of celebrities — Michael Jackson, Katie Couric, Bill Clinton, as well as world royalties from England to Saudi Arabia.

Despite having millions to spend, it was not enough as he was cited for being involved in one of America’s largest Ponzi schemes in 1993.

Despite having access to unlimited women from around the world and receiving three ‘intimate’ massages a day, it also was not enough. Epstein tragically turned to underage victims. He was convicted and pled guilty to sexually abusing minors in 2008. Despite serving prison for this crime, he continued to victimize young girls to this day according to the legal case filled against him by numerous victims.

Epstein lived-out the horror of Solomon’s Ecclesiastes warning by ignoring it.

Not all billionaires did.

Terry Looper, CEO and founder of Texon, is a multi-millionaire like Epstein. He became obsessed with work and riches which nearly drive him to physical collapse. Looper turned to God and was able to restore his sanity and family.  Looper took Solomon’s advice by fearing God, remembering God and following God (Ecc 12:6,13) and because of it he was able to turn his life around.

You can watch a superb interview of Terry Looper below and hear about his new book “Sacred Pace”.

P.S. In similar news, just as King Solomon was unhappy with 600 wives, so too is celebrity Larry King who just announced his 7th divorce this month of his wife of 22 years.