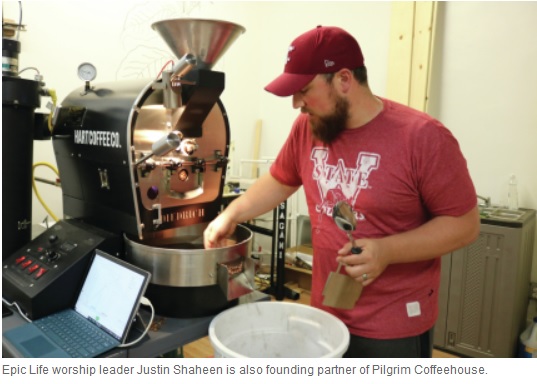 Born in a small north Idaho mountain town, it came as a shock when a gritty urban Seattle street eventually captured the heart of Pastor Keith Carpenter, who has spent the past 11 years reclaiming Aurora Avenue in Seattle, WA, for the cause of Christ.

“My folks moved to Grangeville, ID, and it was there I was born and gave my life to Christ,” Carpenter said. “I felt a spark for ministry at 10 years old, but didn’t know what to do with it. After meeting my wife in Finland, we got married and moved to her home state of Minnesota.”

Carpenter gained degrees in computer science and business and he and Kristine began to grow their family with four sons. While returning late from a mission trip, his employer fired him. He also realized he was “dying” in the business world.

“I started teaching a college group at our church and began a construction business to support us, and that group grew to 500 people in six years,” Carpenter recalled. “The church was transformed and I then was able to devote full time to that ministry. It was always my goal to get students involved in the church and then send them out at graduation.”

Once again, traveling the world with students on a mission trip, Carpenter felt God tap him on the arm and calling him: take a group and go to Seattle. He woke up weeping that night from a dream where he saw a street of homelessness, prostitution and evergreen trees and sensed a pull he could not explain. During an online search, he connected with Gary Irby and the church planting network in the Northwest Baptist Convention.

“I went to Seattle and asked Gary to meet me at a coffee shop on Aurora Ave., a name that Kristine also dreamed about — and we are not people that are used to having dreams and visions,” Carpenter said. “I had confirmations all along the way and prepared with a team of nine 20-somethings to come and we made our departure with roadblocks in the way. We realized how crazy we looked to everyone.”

Nearby Northgate Baptist Church allowed the fledgling group to use its facility on Sunday evenings as they prepared to launch Epic Church in a movie theater. But the Northgate membership had shrunk to a dozen members and they decided to bless the new congregation with the building and property when they realized they couldn’t continue as a church.

“Church planting in the city is incredibly difficult,” Carpenter noted. “We see about 20 percent of our church leave every month, because they can’t afford to live here, not to mention the homelessness and resulting social ills that surrounds us. Just yesterday I picked up five needles before church, not to mention human feces and used condoms. If God would’ve told me in advance, I would have fought him, but he protected this property for north Seattle.”

Epic Life members immersed themselves in the Aurora neighborhood and began making headway. The church offers the needy grocery items on Monday morning in the church parking lot and they know all the business owners in their area.

“We pray over them,” Carpenter said, “and now only one of the original nine seamy businesses that were originally here when we arrived is still in place. That being said, others, such as Planned Parenthood, marijuana shops and massage parlors, have taken up residence.”

Seattle’s city leaders approached the congregation last year, asking the church to host a community meeting for civic and business owners of North Seattle, which resulted in the church being asked to lead in an effort to create an urban village in the very neighborhood they have been ministering. For seven years the church has also a community-wide event that celebrates North Seattle with business booths, music and a carnival.

“We have the blessing of the city and a grant from them to help with the expense,” Carpenter said. “We told business leaders we believe strongly in Jesus Christ and his redemption and if you’re okay with us leading with that in mind, we will do it – and they agreed.”

Another ministry component at Epic Life is Pilgrim’s Coffee, a for-profit business dedicated to roasting and serving coffee at area events, which is also used to bless other area churches. A 1940s-era truck has been retrofitted with modern coffee-making technology, and the church envisions opening multiple brick and mortar coffee shops on Aurora Avenue to purposefully be in the business world in a way that connects people.

“We would like to have two trucks and already are partnering with other church plants to help them connect with their neighborhoods,” Carpenter added. “We source our coffee from mission agencies around the world or farmer co-ops that are a ministry themselves. Any money we make goes to support church planting.”

Carpenter — entrepreneurial by nature — envisions starting 100 churches; three are underway. He also started a local pastor’s group that now has 23 in attendance. The church also operates a preschool three days a week to offer a family-friendly ministry in its own neighborhood.

“We claimed Aurora Avenue and couldn’t be more excited to see how God fulfills his promises, just as he did for Moses when he dropped the children of Israel in the Promised Land.”