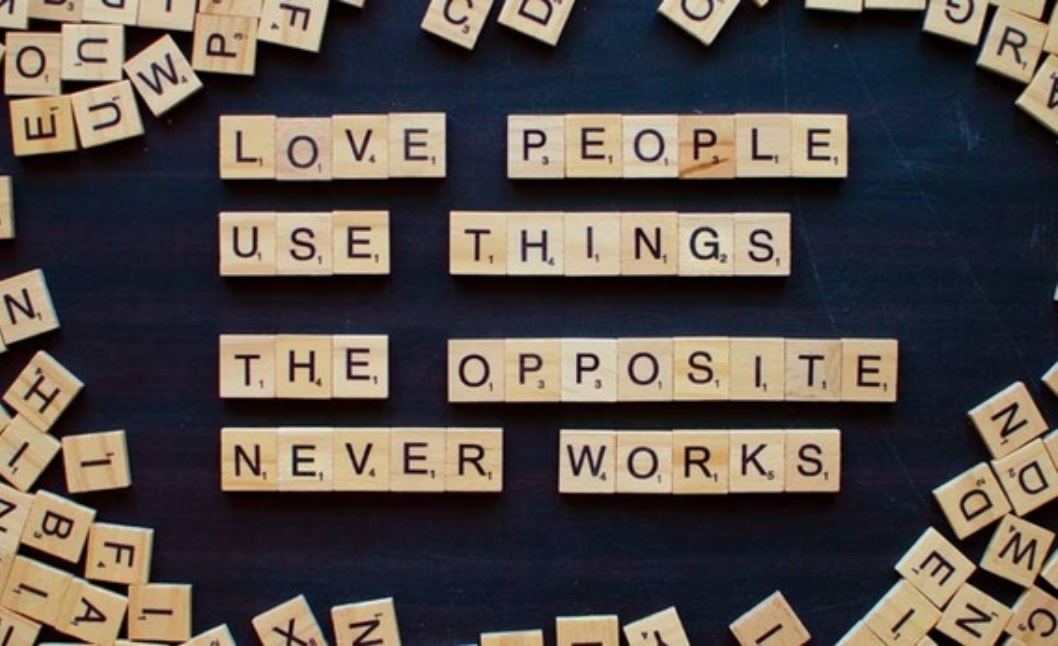 God created us to love people and use things, but materialists love things and use people. Materialism drives not just the “bad apples” of society; it drives “the best and the brightest,” those from the finest homes and schools, those who become government and business leaders, physicians, and attorneys.

Here are two of the definitions of materialism from The Merriam-Webster Dictionary: “A doctrine that the only or the highest value or objectives lie in material well-being and in the furtherance of material progress,” and “a preoccupation with or stress upon material rather than intellectual or spiritual things.”

Materialism begins with our beliefs. Not merely what we say we believe—not our doctrinal statement—but the philosophy of life by which we actually live. So even though true Christians would deny belief in the philosophical underpinnings of materialism (they couldn’t be Christians if they didn’t), they may nonetheless be preoccupied with material things. Materialism is first and foremost a matter of the heart.

Beyond the examples in Scripture of many people who are warped and destroyed by greed, and its warnings against idolatry, the Bible also lists various dangers of becoming centered on money and possessions. Warning: Don’t dismiss this as negativism. On the contrary, if we understand the dangers of materialism, it will help liberate us to experience the joys of Christ-centered stewardship.

What does materialism actually do to us? Here are ten answers to that question.

Jesus rebuked the Laodicean Christians because although they were materially wealthy, they were desperately poor in the things of God (Revelation3:17-18). Materialism blinds us to our own spiritual poverty. It is a fruitless attempt to find meaning outside of God. When we try to find ultimate fulfillment in a thing or a person other than Christ or a place other than Heaven, we become idolaters. According to Scripture, materialism is not only evil; it is tragic and pathetic (Jeremiah 2:11-13).

Every attempt to find life in anyone or anything but God is vain. Materialism is a dead-end street. It is not only wrong—it is utterly self-destructive.

2. Materialism blinds us to the curses of wealth.

John Steinbeck wrote a letter to Adlai Stevenson, which was recorded in the January 28, 1960edition of the Washington Post. Steinbeck says, “If I wanted to destroy a nation, I would give it too much, and I would have it on its knees, miserable, greedy, sick.”

Scripture suggests that the possession of riches is almost always a spiritual liability (Mark10:23-25). If Jesus was serious when He said how hard it is for a rich man to enter God’s kingdom, and if being part of the kingdom of Heaven is the highest blessing a person can receive, then how can we imagine that having riches is always a blessing from God? Material prosperity can begin as God’s blessing, but when we treat it as a substitute for God, it becomes a curse.

3. Materialism brings us unhappiness and anxiety.

The risk of financial resources is well illustrated by the suicides and emotional breakdowns that commonly occur during significant drops in the stock market. It’s also demonstrated in the epidemic levels of high blood pressure and hypertension among today’s “successful” professionals.

Materialism is the mother of anxiety. No wonder Christ’s discourse on earthly and heavenly treasures is immediately followed by His admonitions not to worry about material things (Matthew6:25-34).

Paul says that the rich should not “put their hope in wealth, which is so uncertain, but . . . in God, who richly provides” (1 Timothy6:17). To set our heart on earthly riches not only deprives God of glory, others of help, and ourselves of reward, it also destines us to perpetual insecurity. In contrast, the one whose hope is in God will be devastated only if God fails—and He never does.

The book of Ecclesiastes is the most powerful exposé of materialism ever written. Solomon recounts his attempts to find meaning in pleasure, laughter, alcohol, folly, building projects, and the pursuit of personal interests, as well as in amassing slaves, gold and silver, singers, and a huge harem to fulfill his sexual desires (Ecclesiastes 2:1-11). He lived by this philosophy: “I denied myself nothing my eyes desired; I refused my heart no pleasure” (Ecclesiastes 2:10).

After his years as the world’s richest man, Solomon says, “When I surveyed all that my hands had done and what I had toiled to achieve, everything was meaningless, a chasing after the wind; nothing was gained under the sun” (Ecclesiastes 2:11). Most people chase their mirages with money, but they run out of money before they run out of mirages. So they still believe the lie that “if only I had more money, then I’d be happy.” But Solomon had it all. He had more money than he could possibly spend. He ran out of mirages before he ran out of money.

Consider this statement, “Whoever loves money never has money enough; whoever loves wealth is never satisfied with his income” (Ecclesiastes 5:10). The repeated word never is emphatic—there are no exceptions.

5. Materialism obscures many of the best things in life, which are free—including the gift of salvation.

Some of life’s greatest blessings are just as available to the poor as to the rich, and often they are far more appreciated by the poor, whose lives are less cluttered and distracted by material wealth. The greatest blessing that God offers is available to all: “Come, all you who are thirsty, come to the waters; and you who have no money, come, buy and eat! Come, buy wine and milk without money and without cost” (Isaiah 55:1). The same invitation is repeated in the final chapter of the Bible: “Whoever is thirsty, let him come; and whoever wishes, let him take the free gift of the water of life” (Revelation22:17).

The only thing worth buying cannot be bought with money. God’s Son bought us our salvation, and He freely gives Himself to all who seek Him. Money cannot buy salvation, and it cannot buy rescue from judgment. “Wealth is worthless in the day of wrath” (Proverbs 11:4).

6. Materialism spawns independence and self-sufficiency, which are deadly to faith.

Why have faith in God when you have faith in yourself? Why trust God when you have all your bases covered? Why pray when you have everything under control? Why ask for your daily bread when you own the bakery? Self-sufficiency is the great enemy of faith and prayer, which are the heartbeat of the Christian life. We pride ourselves on our “financial independence,” but where would we be without God, from whom our every breath is a gift?

7. Materialism leads to pride and elitism.

Jesus came to die for every person of every social and economic level. Paul reminds the proud Corinthians that the Church is made up of the dregs of this world (1 Corinthians1:26-31). Elitism boosts our egos by making us think we are somehow more worthy than others. Few things are more repugnant to the Lord than the rich despising the poor (Job 12:5). Yet our clubs and social circles, sometimes even our churches, foster this very attitude.

James condemned the rich, virtually assuming that anyone who is rich practices injustice to the poor and will come under God’s judgment as a result (James 5:1-6). The Old Testament prophets spoke out so consistently against the oppression of the poor by the rich that they left the distinct impression that a righteous rich man is rare (Isaiah 10:1-3; Jeremiah 5:27-28; 15:13; Hosea 12:8; Amos 5:11, 24; Micah 6:12).

The rich man will usually be materialistic. The materialistic man will always be unjust. The wealthier the man, the greater his opportunity for injustice. Of course, the wealthy man is no more inherently sinful than the poor—he simply has more means and opportunity to subsidize and impose his sins upon others.

9. Materialism fosters immorality and the deterioration of the family.

Those who enjoy prosperity, power, and privilege also commonly indulge in sexual immorality. Solomon had seen his father’s bad example. Prosperous King David, spoiled by getting everything he wanted, did not deny himself one more possession—another man’s wife (2 Samuel 11).

For years studies have shown a connection between marital infidelity and an increase in income. Of course, the point is not the income itself, but the lifestyle it underwrites. A Christian can make a million dollars a year, give generously, live modestly, and avoid much of the added temptation to immorality. It’s not how much we make that matters. It’s how much we keep.

A consequence of adultery is often divorce, and the consequences of divorce in the lives of children are inestimable. Even when adultery doesn’t result in divorce, it destroys the fabric of marriage and prevents the home from being a moral sanctuary from the corruption of the world. Anything that contributes to an increase in immorality, as materialism clearly does, directly contributes to the breakdown of families and the deterioration of society.

10. Materialism distracts us from our central purpose.

When Jesus describes the various kinds of people who respond to the gospel, He states that some seed “fell among thorns, which grew up and choked the plants” (Matthew 13:7). He later explains to the disciples, “The one who received the seed that fell among the thorns is the man who hears the word, but the worries of this life and the deceitfulness of wealth choke it, making it unfruitful” (Matthew 13:22). Notice the clear relationship between wealth and worry.

Like the circus plate spinner who runs frantically from one plate to the next, quickly spinning each one again before it can fall and crash, many of us center our lives around possessions, concerns, and activities that demand our constant attention and thereby draw attention away from what God has called us to be and do.
Let’s Not Fail to Prepare for the Life Ahead

After striking a large deposit of gold, two miners in the Klondike gold rush were so excited about unearthing more and more gold each day that they neglected to store up provisions for the winter. Then came the first blizzard. Nearly frozen, one of the miners scribbled a note explaining their foolishness. Then he lay down to die, having come to his senses too late. Months later, a prospecting party discovered the note and the miners’ frozen bodies lying on top of a huge pile of gold.

Obsessed with their treasure, these men hadn’t taken into account that the fair weather wouldn’t last and winter was coming. Hypnotized by their wealth, they failed to prepare for the imminent future. The gold that seemed such a blessing proved to be a deadly curse.

Dazzled by riches and the prospect of having more, materialists live out their life on earth as if this were all there is. They fail to prepare for the long life ahead. One day, sooner than expected, materialists will find out they were wrong. They will discover the truth that all the wealth in the world can do nothing for them. If they don’t make that discovery until they die, it will be too late to go back and change the way they lived.

The good news is, God gave us His Word so we don’t have to wait until we die to discover how we should have lived. That’s why in order to break free from the tyranny of materialism, we desperately need to read the Scriptures, to grapple with these issues, bring them to God in prayer, discuss them with our brothers and sisters, and look for and learn from those rare models of nonmaterialistic living in our Christian communities.