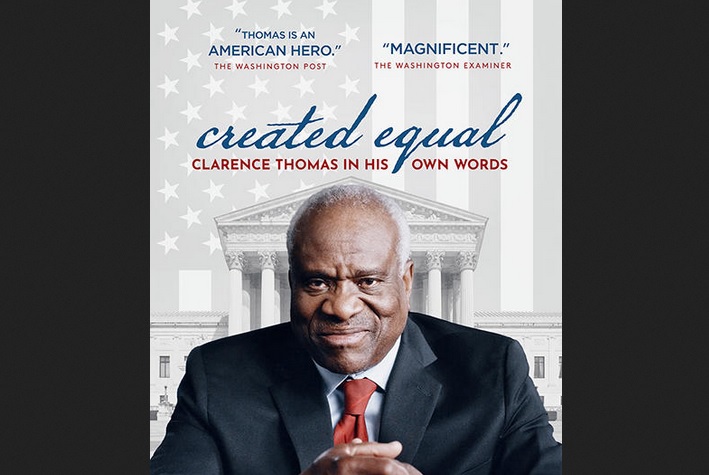 Manifold Productions, Inc.—creator of 15 award-winning films over 30 years—is releasing the faith trailer for the new documentary, Created Equal: Clarence Thomas in His Own Words, which is coming to theaters nationwide as part of a platform theatrical release starting January 31. With unprecedented access, producer/director Michael Pack interviewed Justice Thomas and his wife, Virginia, for over 30 hours–the longest interview any Supreme Court Justice has ever given.

“Justice Thomas’ gripping personal story is largely unknown, and his roots as a man of deep faith and religious conviction have never been detailed as extensively as they are in this film. As a teenager, Clarence Thomas entered seminary, intending to become a priest. How that experience changed his life, and how his career changed course is a story that is so compelling and surprising, we believe audiences will absolutely want to take their families to experience ‘Created Equal: Clarence Thomas in His Own Words,'” said Michael Pack, Director and Producer of Created Equal. “This is a rare story about standing firm on what you believe no matter what the cost, an example of conviction and courage.”

Strong Reviews for “Created Equal: Clarence Thomas in His Own Words:”

The film has already garnered rave reviews and buzz from advance screenings in Washington D.C….

– The Washington Post said “It is a marvel of filmmaking that two hours pass so quickly. At the end of a screening I recently attended, there weren’t many dry eyes in the room.”

– Time Magazine: “Offers viewers rare insight into the mind of a justice known for his reticence on the public stage.”

– Washington Examiner: “Everyone interested in the truth and a great story should go and see it.”

Key Quotes from “Created Equal: Clarence Thomas in His Own Words:”

– “And for the first time in my life racism and race explained everything. It became the substitute religion; I shoved aside Catholicism and now it was this: it was all about race.”

– “I felt as though in my life, I had been looking at the wrong people, as the people who would be problematic toward me. We were told that ‘Oh it’s going to be the bigot in the pickup truck. It’s going be the Klansman. It’s going to be the rural sheriff.’ Ultimately the biggest impediment, was the modern day liberal. They were the ones who would discount all those things, because they have one issue, or because they have the authority, the power to caricature you.”

About the Creators of “Created Equal: Clarence Thomas in His Own Words:”

Michael Pack, writer/producer/director, is President of Manifold Productions, Inc., an independent film and television production company he founded in 1977. Mr. Pack has written, directed, and produced numerous award-winning, nationally broadcast documentaries, as well as corporate and educational films. Some of his earlier credits include: RICKOVER: The Birth of Nuclear Power, narrated by Joan Allen (2014); Rediscovering Alexander Hamilton, hosted by Richard Brookhiser (2011); God and the Inner City, narrated by Phylicia Rashad (2003); and Rediscovering George Washington, hosted by Richard Brookhiser (2002). All have been nationally broadcast on PBS.