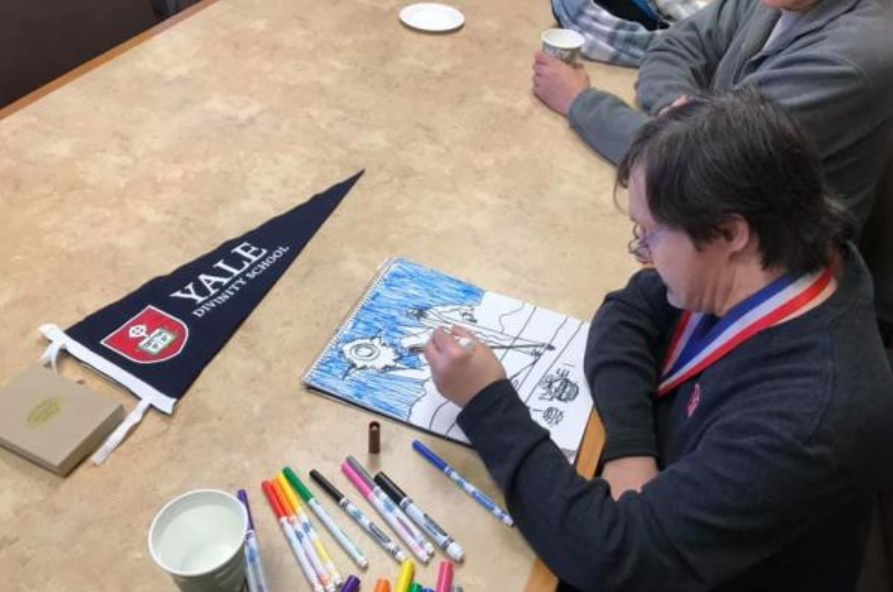 Tom Krattenmaker
Oregon based author and guest writer for USA Today and Sojourners.

A crisis like the coronavirus pandemic reveals who we are as individuals and as a society. When push comes to shove, as the saying goes, which side of us will have the final say?

Will it be the side modeled by the good Samaritans volunteering to deliver food to the isolated and vulnerable, sew protective masks for health care workers, or, as some pro basketball players are doing, dip into their pockets to support suddenly jobless arena workers?

Or will it be, ultimately, the side that favors those with the most power, status, and wealth? The side that allows some people to scoot to the front of the line for those too-scarce coronavirus tests — as has happened with entire NBA teams and politicians, including Rep. Matt Gaetz (R-Fla.)? The side that regards those most vulnerable to the virus — the elderly, the disabled, those already suffering from medical problems — as expendable?

If it’s the latter, perhaps that’s just “the story of life,” as President Trump put it.

If that’s the story of life, then we must write a better one — like the story of Bruce Gillespie and Sam Goldenberg, whose remarkable collaboration has inspired me and others to better appreciate a group of people who society is quick to overlook and undervalue, in ways detrimental to our character: the intellectually disabled.

When Bruce Gillespie was born — back in the 1950s before there were many programs for people with Down syndrome — doctors advised his parents to place him in an institution. He was, they said, a “non-entity.” When his parents disagreed and took him home, they could not have known that their son would become a celebrated artist whose colorful art would one day be displayed at Yale and other prestigious venues.

But he did. And it was. A big part of the reason, in addition to Gillespie’s talent, was his relationship with mentor Sam Goldenberg, who saw Gillespie as a true human being with gifts to offer.

Goldenberg, a special education teacher, noticed Gillespie’s talent when he first encountered him in the 1970s at an education center in Danbury, Conn., where Goldenberg was teaching and Gillespie, a disabled young adult, was working. 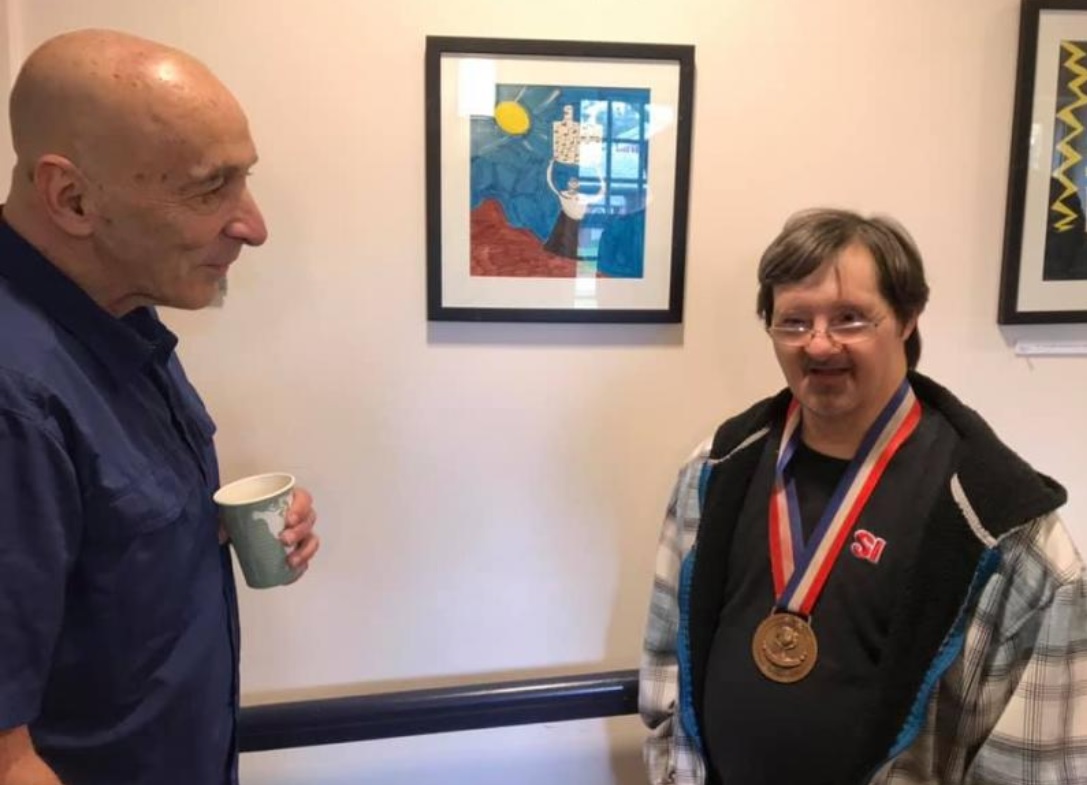 “Every chance he got,” Goldenberg recalls, “Bruce would find some paper and a pen and he’d be drawing. That was his love. He drew like someone who was seeing something for the first time — with young eyes, with creative eyes.”

Goldenberg encouraged Gillespie’s drawing and took it public through a series of posters promoting high-profile benefit concerts that Goldenberg was organizing, featuring artists like the famed pianist Keith Jarrett.

The pair were separated for decades after Gillespie’s family moved to Florida, but they reunited in 2015 when the artist moved back to Connecticut. Goldenberg set out with renewed determination to help Gillespie bring his art to the public, first with an exhibit focused on the old concert-promotion drawings, which they showcased in the gallery of the Arts Council of Greater New Haven; then, with a very different set of Gillespie drawings that Goldenberg had in safe keeping since before the two had parted.

The subjects of these drawings were scenes from the Bible, and the process that produced them was a microcosm of the two men’s relationship: Goldenberg had read the artist a passage — Gillespie himself cannot read or write — and urged him to draw the scene. First, they concentrated on the account of creation set out in Genesis; then, the Ten Commandments.

Ever the promoter, Goldenberg organized the first set into an exhibit that appeared at the Knights of Columbus in New Haven. Next came a Ten Commandments exhibit at the University of Hartford, part of a Bruce Gillespie Art Day at the university that included a panel discussion and video presentation about him and his work.

Then, last April, they featured the exhibit at Yale Divinity School, where I work. YDS showcased the Ten Commandments drawings and held a reception in honor of Goldenberg and Gillespie. The artist had a medical emergency and was unable to attend, but he returned a few weeks later, receiving a medal of honor from Dean Greg Sterling and drawing a picture for the dean.

In his remarks at the reception, Sterling, like many of us at the Divinity School, marveled at the originality of Gillespie’s depiction of Moses holding up the stone tablet bearing the Ten Commandments. Instead of words, Gillespie filled the tablet with musical notes, as if to imagine these foundational teachings not as a text but a song. 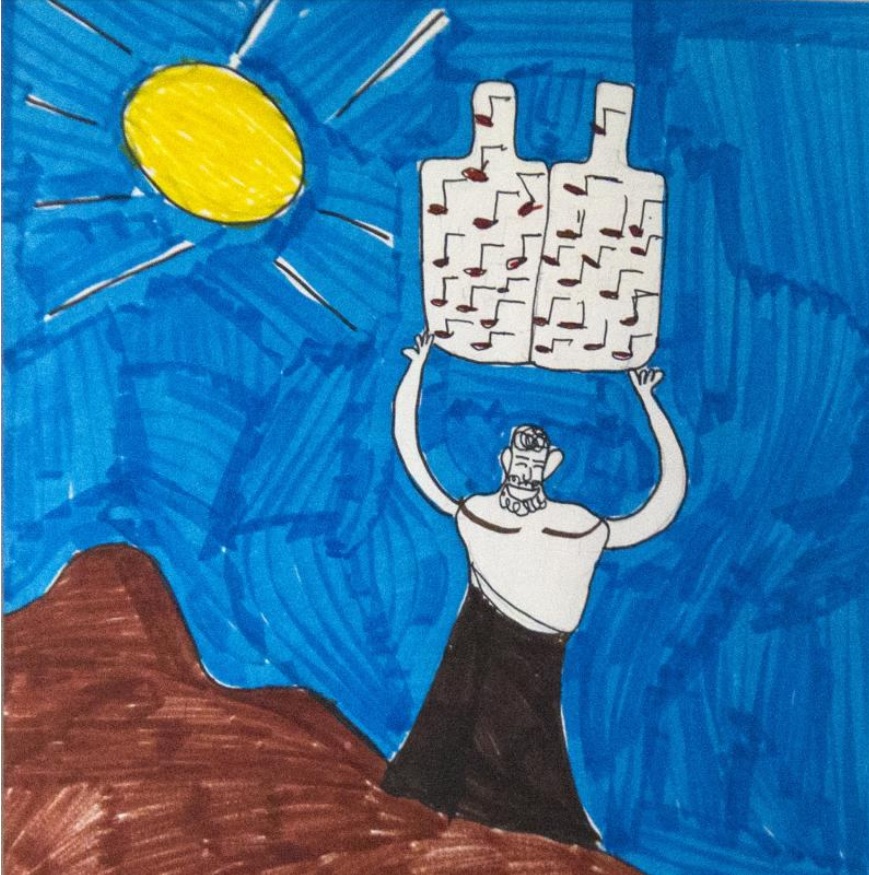 One of Bruce Gillespie’s depictions of the Ten Commandments. Photo courtesy YDS.

“It is the unfamiliar depiction of the familiar that draws me to Bruce’s art,” Sterling said. “Bruce’s art is an invitation for us to use our own imagination — in other words, for us to exercise the imago dei within us.”

The image of God and inherent dignity is within in all of us.

Tragically, not everyone shares this ethic. By one view of the world — one that has the potential to metastasize in our current crisis — a person’s worth revolves around her or his physical appearance and strength, around one’s wealth, power, and status.

Not to single out the president, for he is hardly alone in conceiving of the world this way, but think about how Trump and his most ardent followers have emphasized such criteria: his mocking pantomime of the involuntary movements of a physically disabled journalist; his ridicule of the facial features of onetime rival Carly Fiorina and the height of former Democratic contender Mike Bloomberg; his portrayal of antifa demonstrators as physically weak (“tiny biceps!”) and of his supporters and stout and strong.

A crisis like the coronavirus outbreak could, if we’re not at our best, unleash these hounds on a much wider scale and turn society into a dog-eat-dog battle for a shrinking pile of scraps.

By this view of the world, Bruce Gillespie indeed is the “non-entity” as his parents were told at the time of his birth. By this logic, people with Down syndrome and other disabilities, like others who aren’t famous or wealthy or physically impressive, are disposable, expendable.

But the reverse is true: It’s that worldview that’s defective.

Although few with Down syndrome will have their art displayed at Ivy League universities or achieve feats of a similar magnitude, they all have something to offer, they all matter, and if we pay attention, they will show us their depths and fresh ways of seeing and depicting the world.

This is the conception of the world that we must summon, act on, and never lose, especially in the throes of a crisis that threatens to bring out our opposite impulses.