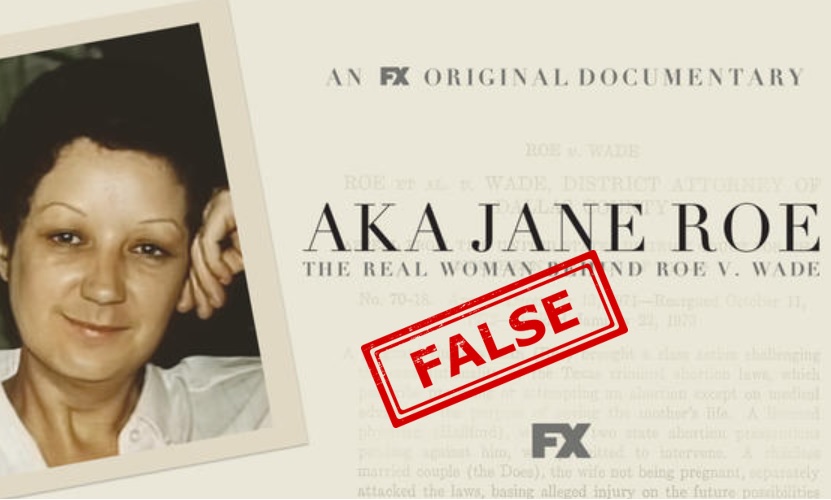 Allan Parker, the founder and president of The Justice Foundation, represented Norma McCorvey from 2000 to 2005 in her legal efforts to reverse her own case. With news reports of the upcoming documentary, Mr. Parker has released the following statement:

“In view of my many conversations with Norma and considering the sworn testimony she provided to the Supreme Court, I believe the producers of the newly-released FX documentary ‘AKA Jane Roe’ paid Norma, befriended her and then betrayed her. This documentary can not be trusted and the perception it attempts to create around my friend and former client, Norma, is patently false.”

Here are the most important facts:

– Norma changed her mind from being pro-abortion to being pro-life after working in the abortion industry. The actual reality of the callous disregard for women led her to change her mind on abortion.

– Once she became pro-life, Norma fought to the end of her life with all of the power and effort she could muster to reverse Roe v. Wade, including asking the Supreme Court to hear her case again. McCorvey’s arguments in her Rule 60 Motion which she filed have still not been ruled on by the Court to this day.

– Every year on the anniversary of Roe v. Wade, she felt the grief, sorrow and burden of another million babies killed in America. Even though she knew she was forgiven, still felt legally responsible for the deaths. She felt used and abused by the legal system, including her lawyers and the Supreme Court.

About the Justice Foundation’
Founded in 1993 by former law professor Allan Parker, The Justice Foundation seeks to protect the fundamental freedoms and rights essential to the preservation of American society by providing free legal services to promote those rights. We consider it our mission to litigate, educate and advocate for life, liberty and justice. To learn more about The Justice Foundation, please visit www.thejusticefoundation.org.