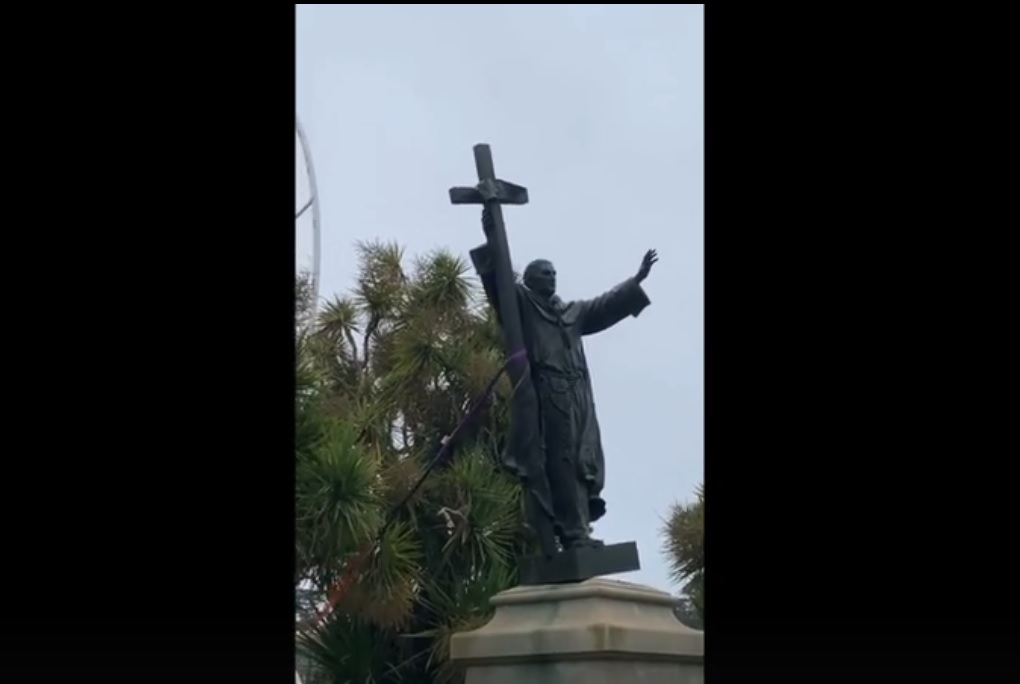 The smashing of religious statues is all the rage. While the extent of the vandalism is new, the ideological forces that unleashed it started a generation ago.

If there is one date that marks the beginning of this crusade it is January 15, 1987. That was the day when Rev. Jesse Jackson marched with hundreds of protesters on the campus of Stanford University screaming, “Hey, hey, ho, ho, Western Civ has got to go.” They were protesting a humanities program known as “Western Culture.” The demonstrators insisted it must be shelved, claiming it lacked “diversity.”

The multicultural assault on Western civilization has only gotten worse. Pope Benedict XVI noted that this politicization of higher education has led to “a peculiar Western self-hatred that is nothing short of pathological.” Now it is in full throttle, and the results are in the street.

It is impossible to attack Western civilization without attacking its Judeo-Christian heritage. The Left knows this and it is this hatred that is animating its activism. The mob has been very busy as of late.

Shaun King wants all statues of Jesus and Mary taken down. Though this black activist does not teach at Harvard Law School, he has been granted office space there to promote his agenda. Jesus “and his European mother,” as he likes to say, represent “a gross form of white supremacy.” Ironically, King’s birth certificate identifies his father as white, a fact that has not gone down well with his open-minded friends at Black Lives Matter.

Protesters in St. Louis don’t like the city’s namesake and want it removed (imagine if they lived in Corpus Christi!). Swastikas and anti-Catholic scribbling was found on the graves of several Dominican friars; their headstones are located on the campus of Providence College. Statues of Saint Junípero Serra, who championed Indian rights, have been smashed in several towns in California. The mob is also going after non-Catholics.

Salinas, California is mandating that an evangelical church sell its downtown property, arguing that it doesn’t fit in with the town’s new look. A memorial fountain in Santa Rosa dedicated to survivors of the Holocaust was partially destroyed a few weeks ago. A statue of Brigham Young was vandalized on the university campus that is named after the leader of The Church of Jesus Christ of Latter-day Saints. In Montana, a man attached a chain to his pickup truck and pulled down a Ten Commandments monument, leaving what was left of it on the street.

The mob is comprised of nihilists. Unlike the Marxists of old, who had a blueprint for the future (flawed though it was), today’s activists just want to tear down. Most of them cannot seriously endorse communism any more (though Black Lives Matter still does), and they cannot point to Eastern civilization as worthy of emulation. Having no ideology or cultural model to offer, they settle for destroying our Judeo-Christian heritage.

None of this is inevitable. It happens because, with few exceptions, our spineless elites are capitulating to their demands all across the country. Make no mistake about it, they would stand up to white supremacists (which they should), but they will not stand up to these left-wing anarchists. Many of these decision makers are simply cowards, but not all of them: some are literally cheering the nihilists on.

In a free society, if people don’t police themselves, the police will do it for them. And if the police are enfeebled, the result is mob rule. There really aren’t too many choices.