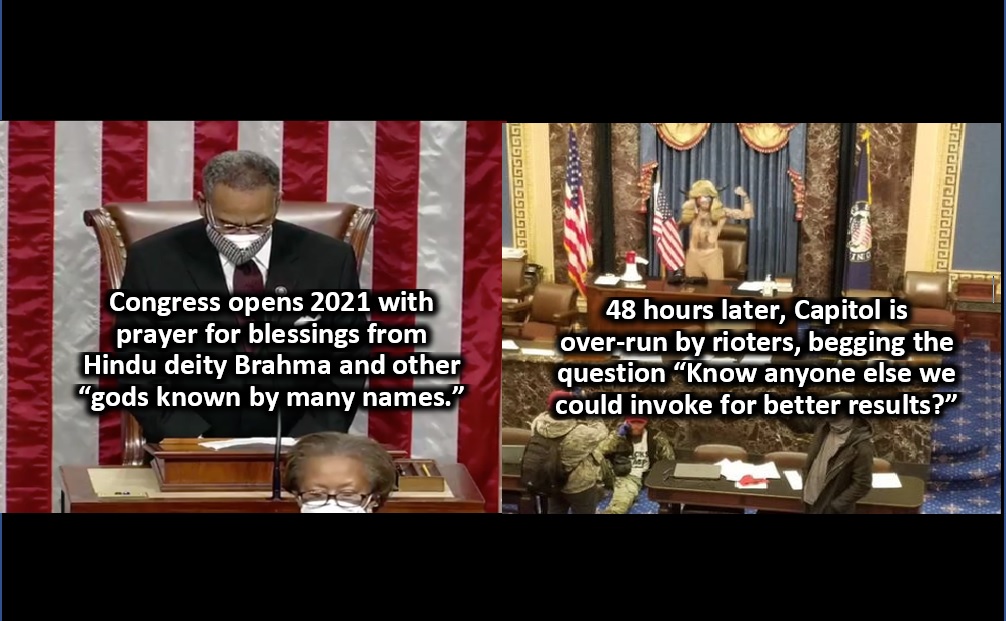 No disrespect to Brahma with the meme above but Brahma and other people’s faith have been disrespected with Congress’ opening prayer from Congressman Emanuel Cleaver (D-Mo.), an ordained Methodist pastor who ended his prayer with,

“May the Lord lift up the light of his countenance upon us and give us peace. Peace in our families. Peace across this land and, dare I ask…oh, Lord…peace even in this chamber now and ever more. We ask it in the name of the monotheistic God, Brahma, and gods known by many names by many different faiths. Amen and a-woman.”

Make no mistake, but Congressman Emanuel Cleaver’s prayer was not a prayer but a political gimmick.  By attempting invoking many “gods” including going as far as mentioning that there are too many names to bother mentioning, you are disrespecting the faiths of people who take their beliefs seriously. (1)

We need to search our hearts for what we are really praying for.  Better results will surely follow.

(1) post-script note:  Asking people not to invoke other gods in a prayer is a very respectful thing to do.   For instance, what if someone decided to honor African American heritage month by highlighting a prominent Black American, but out of fairness to everybody, decided to honor a non-Black American for very Black American honored as not to offend anybody.   Should we honor our mothers with Mother’s Day or just make it honor everyone day.   Honor is about separating and elevating those recognizable things among us.   The exclusivity of the nature of honor is not a conspiracy of negativity to hurt the people who are not mentioned.  Our time of prayer deserves the focus of the one we are praying towards and not politics.