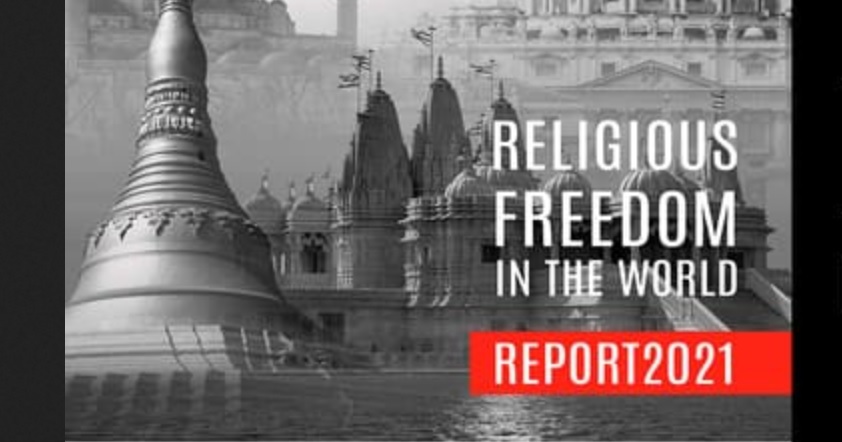 By Aid to the Church in Need,

RELIGIOUS FREEDOM IS VIOLATED SEVERELY in one out of every three countries. In the last two years, the fundamental right to freedom of belief was not respected in 62 (31.6 percent) of the world’s 196 countries; 67 percent of the world’s population, or 5.2 billion people, live in countries that exhibit grave violations of religious freedom, including China, India and Pakistan, three of the world’s most populous countries. And Christians are most often targeted by persecution. These are among the key findings of the 2021 Religious Freedom in the World report (RFR), published every two years by Aid to the Church in Need (ACN).

In 26 of the 62 countries that do not respect religious freedom people suffer persecution—and in 95 percent of these the situation has worsened during the period under review (2018-2020). Nine countries appear in this category for the first time: seven in Africa (Burkina Faso, Cameroon, Chad, Comoros, Democratic Republic of the Congo, Mali, and Mozambique) and two in Asia (Malaysia and Sri Lanka).

Data reflect the radicalization of the African continent, especially in Sub-Saharan and Eastern Africa, where there has been a dramatic increase in the presence of jihadist militia. Violations of religious freedom—including extreme persecution such as mass killings—are now occurring in 42 percent of African countries. The report also reveals a rise of transnational Islamist networks stretching from Mali to Mozambique in Sub-Saharan Africa, to the Comoros in the Indian Ocean, and to the Philippines in the South China Sea, with the aim of establishing a “transcontinental caliphate.”

The report highlights another new trend: the abuse of digital technology, cyber networks, and mass surveillance based on artificial intelligence (AI) and facial recognition technology to increase control and discrimination of religious minorities in some of the nations that most severely violate religious freedom. This is most evident in China, which has been oppressing religious groups with the help of 626 million AI-enhanced surveillance cameras. Jihadist groups are also using digital technology for the radicalization and recruiting of followers.

In other findings, the research showed that in 42 countries renouncing or changing one’s religion can lead to severe legal and social consequences, ranging from ostracism within the family to even the death penalty. The RFR also notes the increase of sexual violence used as a weapon against religious minorities—in particular crimes against women and girls who are abducted, raped, and forced to convert.

n the West, the report concludes, there has been a rise in “polite persecution,” a term coined by Pope Francis to describe how new cultural norms and values come into sharp conflict with individuals’ right to freedom of conscience, consigning religion “to the enclosed precincts of churches, synagogues or mosques.”

The research also addresses the profound impact of the COVID-19 pandemic on the right to religious freedom. Faced with the magnitude of the emergency, many governments imposed extraordinary measures, in some cases applying disproportionate limitations on religious worship, as compared to other, secular activities. In some countries, such as Pakistan or India, humanitarian aid has been withheld from religious minorities. The pandemic was also used as a pretext to stigmatize certain religious groups on social media, blaming them for allegedly spreading or even causing the pandemic.

ACN Executive President Dr. Thomas Heine-Geldern concluded: “Regrettably, despite the, albeit important, UN initiatives and the staffing of religious freedom ambassadorships, to date the international community’s response to violence based on religion, and religious persecution in general, can be categorized as too little, too late.”

First published in 1999, the biennial report analyzes the extent to which the fundamental human right to religious freedom, protected under Article 18 of the Universal Declaration of Human Rights, is respected for all religions in the 196 countries of the world.

For the full text of the report, please click here

To read the Executive Summary of the report, please click here