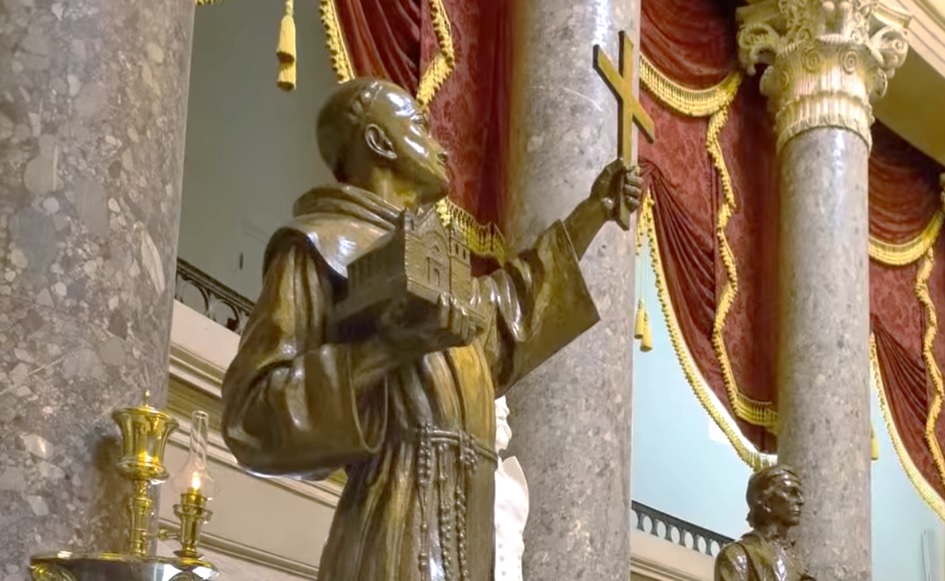 The California legislature has sent a bill to Gov. Gavin Newsom that he should forthrightly veto. The bill is based on a vicious lie: it contends that St. Junípero Serra was responsible for the mass murder of Indians in the 18th century. The purpose of the bill is to replace a statue of Serra at the Capitol in Sacramento with a new monument that celebrates the indigenous population.

The bill is not only based on bad history, it is a slanderous attack on the one man who actually did stand up for the rights of Indians at the time.

Here is what it says: “Enslavement of both adults and children, mutilation, genocide, and assault on women were all part of the mission period initiated and overseen by Father Serra.”

In 2014, a year before Pope Francis canonized Serra, I read many books on the priest. I did so knowing that some of the Church’s detractors would exploit the occasion in 2015, seeking to blame Serra for the offenses committed by the Spaniards. The result was the publication of a monograph, “The Noble Legacy of Father Serra.” (It can be found on the Catholic League’s website; a shorter version is also available.)

Known as the greatest missionary in U.S. history, Serra traveled 24,000 miles, baptizing and confirming thousands of persons, mostly Indians (in 1777 the Vatican authorized the Franciscan priest to administer the sacrament of confirmation, usually the reserve of the bishop). He had one goal—to facilitate eternal salvation for the Indians of North America.

Not only did Serra not initiate or approve the inhumane treatment of the Indians, he led the protests against it. Importantly, the Spanish Crown ultimately agreed with his position.

Some of the Spanish colonizers did mistreat the Indian women. But Serra not only objected, he took specific measures to stem the tide of abuse.

Charging Serra with genocide is obscene. Genocide is what Hitler did to the Jews. Serra never killed anyone. Those making this mind-boggling accusation are literally creating a narrative that has no basis in fact. Hitler put Jews in ovens; the missionaries put the Indians to work, paying them for their labor.

Serra employed Indians as teachers, and the missionaries taught them how to be masons, carpenters, blacksmiths, and painters. They were also taught how to sell and buy animals, and were allowed to keep their bounty. Women were taught spinning, knitting, and sewing.

Professor Gregory Orfalea, author of Journey to the Sun: Junípero Serra’s Dream and the Founding of California, published by Scribner in 2014, writes that “To the Indian, he [Serra] was loving, enthusiastic, and spiritually and physically devoted.”

Salvatore J. Cordileone and Jose H. Gomez, the archbishops of San Francisco and Los Angeles, respectively, have a timely piece on St. Serra in today’s Wall Street Journal. They recommend that the statue of Serra, which was torn down last year during the riots and is now in storage, be returned to the state’s Capitol, along with a new monument honoring the indigenous Californians.

The bill before Gov. Newsom is the product of disinformation promoted by Black Lives Matter and other left-wing activists. It is propaganda, not scholarship.

We are urging everyone to let Gov. Newsom know that to sign this bill is to smear St. Serra and insult millions of Catholics, not only in California but all over the world.