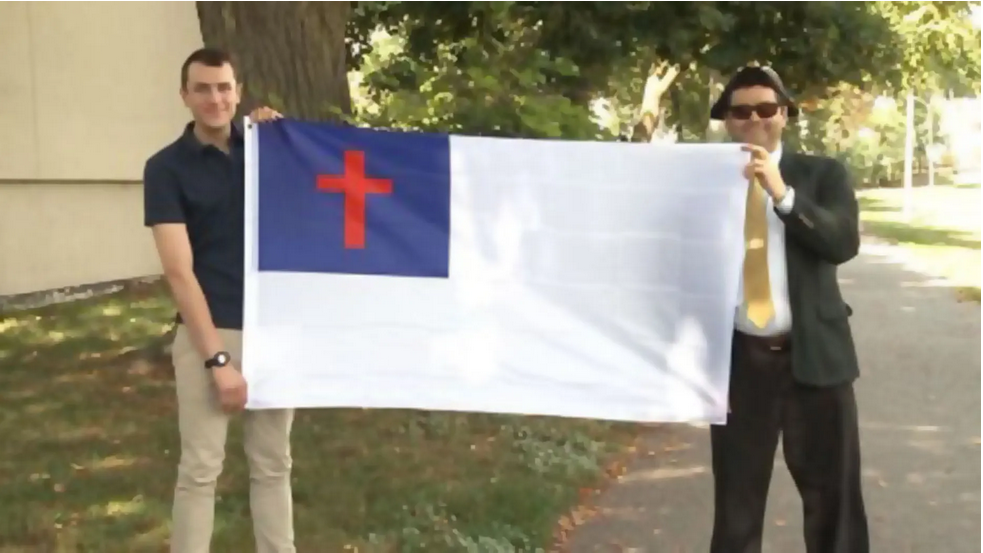 The U.S. Supreme Court granted Liberty Counsel’s cert petition and will hear the case regarding the censorship of the Christian flag in Boston. The High Court will likely hear oral argument early next year with a decision expected by June 2022.

Although the city of Boston created a public forum for private speakers to temporarily raise a flag on one of its poles and never censored any of the prior 284 applications, it censored the Camp Constitution’s flag during its Constitution Day event because the application referred to it as a “Christian flag.” Camp Constitution wanted to highlight the Christian Founders during the Constitution Day event. Without seeing the flag, Boston censored it solely because of the word “Christian” on the application. Boston took the position that it was permitted to censor the flag because it controlled the flag poles and it was government, not private speech. The lower court and the court of appeals ruled twice in favor of Boston. This case will resolve the issue of government versus private speech.

Liberty Counsel filed a lawsuit on behalf of Boston resident Hal Shurtleff and his Christian civic organization, Camp Constitution, arguing that the city of Boston violated the First Amendment by censoring a private flag in a public forum merely because the application form referred to the flag as a “Christian flag.”

Boston censored the religious viewpoint of Camp Constitution’s flag, which was to be raised for about an hour on September 17 in observance of Constitution Day, while supporters gathered around the flagpole. The flag was part of the ceremony to honor the Constitution and recognize the Christian Founders.

The city refers to its flagpole as a “public forum” and allows private organizations to temporarily raise their own flags on the flagpoles. The city of Boston’s website even states the goals for flag raising events include, “We commemorate flags from many countries and communities at Boston City Hall Plaza. We want to create an environment in the city where everyone feels included.”

The city has even attempted to argue its flagpoles are used for private flag raisings only “15% of the time.” However, since the city has designated it as a “public forum,” this argument is useless since the city’s documented “public forums for all applicants” policy has resulted in a 100 percent approval rate, or 284 flag raisings by private organizations over the course of twelve years, except for the Christian flag.

Other flags raised on the city’s flagpole include the Turkish flag (which depicts the Islamic star and crescent) and the Portuguese flag (which uses religious imagery). City officials have also never denied the “messages” communicated by the “Chinese Progressive Association,” the rainbow flag of Boston Pride, and a “transgender” pink and blue flag. The flags of private community groups include Albania, Brazil, Ethiopia, Italy, Panama, Peru, Portugal, Puerto Rico, and Mexico, as well as of Communist China and Cuba. No flag was ever denied until the city denied the flag of Camp Constitution.

Shurtleff and Camp Constitution first asked the city in 2017 for a permit to raise the Christian flag on Boston City Hall flagpoles to commemorate Constitution Day (September 17) and the civic and cultural contributions of the Christian community to the city of Boston, the Commonwealth of Massachusetts, religious tolerance, the Rule of Law and the U.S. Constitution.

The First Circuit Court of Appeals sided with the city of Boston finding that the flags were government speech. The Court wrongly accepted the city’s argument that the Establishment Clause justified its censorship. However, (1) the application form designates the flag pole as a “public forum” open for private speech; (2) the city never censored a flag in the 12 years prior to Camp Constitution’s application; (3) the city approved 39 flags (averaging over three per month) in the year prior to Camp Constitution’s application; and (4) the flags of the foreign countries could not be government speech because under state law it is a crime to raise the flag of a foreign country on city property.

Liberty Counsel’s Founder and Chairman Mat Staver said, “We look forward to the U.S. Supreme Court hearing Boston’s unconstitutional discrimination against Camp Constitution’s Christian viewpoint. The city cannot deny the Christian flag because it is ‘Christian’ and allow every other flag to fly on its flagpoles. There is a crucial difference between government endorsement of religion and private speech, which government is bound to respect. Censoring religious viewpoints in a public forum where secular viewpoints are permitted is unconstitutional and this case will set national precedent.”