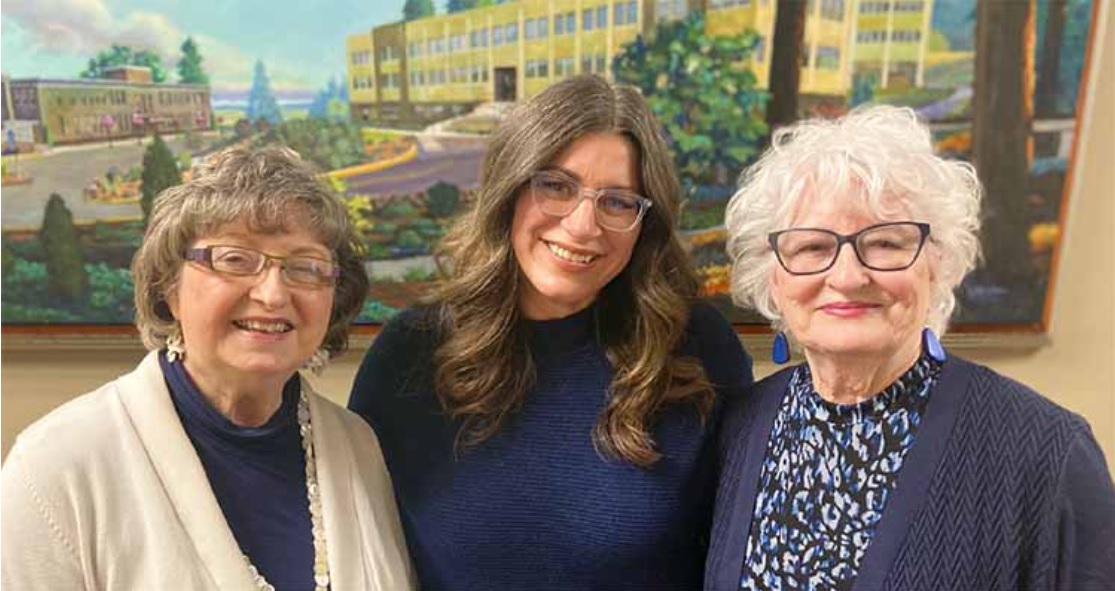 Ruthie LaFreniere walks slowly through the front lobby of Schimmel Hall, guided by her sister Mary. Mary points to a picture hanging above the Welcome Desk. ‚ÄúI donated that to the school over 20 years ago,‚Äù she says. Progressing down the hallway, the two sisters take time to reminisce about the faces on the wall as they pass, a picture catalog of past University presidents.

Ruthie and Mary have been part of Corban since before it was Corban‚Äîbefore it was even located in Oregon. They were both students during the infancy of the University, at Western Baptist Bible College in El Cerrito, California, eventually moving with the school to its Salem location. And their Corban roots stretch back to their childhood.

Ruthie recalls ‚Äúmarrying‚Äù former University President, Dr. David Miller, in their garage in the fifth grade. Mary led the service. And the two remember playing with Tim and Jim Hills as children, ‚ÄúTimmy and Jimmy,‚Äù as Ruthie refers to them.

Seated in the President‚Äôs Office, Ruthie shares some of her story. ‚ÄúI am just madly in love with Corban,‚Äù she says, producing a small piece of paper from her purse and gently sliding it to the center of the long wooden table in President Nord‚Äôs office. The byline on the check reads, ‚ÄúTo God be the Glory.‚Äù

‚ÄúGrowing up, when it came to money, we were poor,‚Äù she recalls. ‚ÄúBut we were rich in so many other things.‚Äù Ruthie, who first arrived at Corban back in 1960, remembers stepping out of school twice because of finances, before eventually graduating in 1967 and taking up a teaching position in the music faculty a year after. ‚ÄúHearing that this money is going to be used as a match for scholarships was just awesome to me,‚Äù she says. ‚ÄúBecause I never would‚Äôve made it through here if I hadn‚Äôt had scholarship support. That was the icing on the cake.‚Äù

But the plan for Ruthie‚Äôs gift first began as a prayer. Prior to her decision to step out in generosity, Corban‚Äôs Advancement team had been praying for a committed donor who could initiate a matching gift opportunity to help encourage others to give toward student scholarship support before the end of the year. Less than a week after that prayer meeting, Ruthie came to them, committed to giving $50,000 to the school, not knowing that she represented the living embodiment of answered prayer.

‚ÄúWe were so excited about how God knit together all of these details,‚Äù says Director of Annual Giving, Shirley Turner, ‚Äúthe heart of a donor with the desires and prayers of our team here at Corban University.‚Äù The plan was fully realized on Ruthie‚Äôs 79th birthday.

Her gift was the exact amount needed to spur donors on to the goal of raising $100,000 toward student scholarship support for Corban Giving Tuesday. By November 30, the day of the event, Ruthie‚Äôs sacrificial gift had encouraged the giving of so many others like her that the team surpassed their ambitious goal, raising $114,482 in support of student scholarships.

‚ÄúWe have seen firsthand what God can do when you are obedient to Him,‚Äù Ruthie says, recalling days when her father, a minister, would pray for food to feed their family, or money to pay bills, having just given his last dime to the church, only to find groceries on their doorstep or a friendly handshake with the exact amount to keep the family going. Ruthie is thrilled to be that same answer to prayer, not only for Corban, but for so many students‚Äîstudents in the same situation she once found herself in as a student at the El Cerrito campus back in the 1960s.

As Ruthie and Mary walk back through the familiar halls of Schimmel, remembering the days they were first populated with young, eager students, Ruthie leaves one final thought. ‚ÄúWhen I think back on my years as a student and how much I love this place, being able to teach here, and then being able to give back, I‚Äôm amazed at all that God has done here. Things we never would‚Äôve imagined years ago,‚Äù she says. ‚ÄúWhat could we ever give that we haven‚Äôt already been given?‚Äù