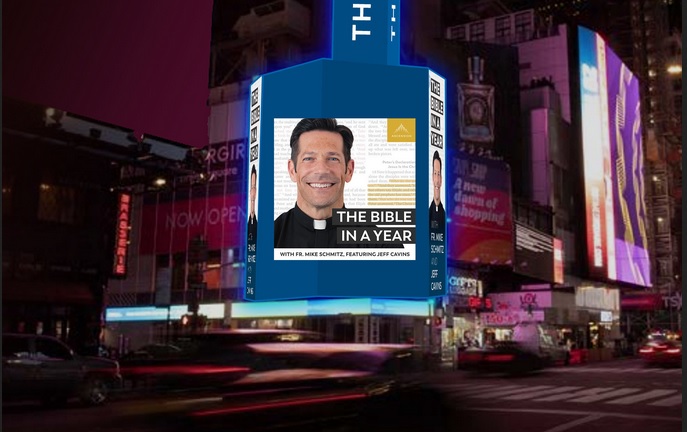 Déjà vu for 2022: America’s top New Year’s Resolution is once again to read the Bible with a Catholic priest.

Hit podcast The Bible in a Year (with Fr. Mike Schmitz)™ featuring Jeff Cavins is back in the #1 position on the U.S. Apple Charts, one year after achieving the same feat in January 2021.

The show is having huge global impact, becoming the #1 podcast in Religion & Spirituality on Chartable’s “Global Reach” analysis, and sitting as the #1 podcast in that category in 15 countries including Great Britain, Italy and the Philippines.

“The hunger for God in our culture is not a flash in the pan, but an enduring desire,” comments podcast featured guest Jeff Cavins. “Interest in the Bible is expanding.”

“So many people listened last year, and they’ve inspired a whole new crowd to participate,” adds Jonathan Strate, president and CEO of Ascension, the Catholic multimedia network behind the show.

The Bible in a Year Podcast by the Numbers

A string of awards and accomplishments evince The Bible in a Year’s national impact in 2021:

To celebrate a standout year, Ascension secured a New Year’s Eve billboard in Times Square promoting the podcast at 7th Ave. & 48th St., New York City. No other Catholic media offering has ever been featured on a Times Square billboard.

The Priest Behind the Podcast

“Many of us are distracted and distressed by the battles we face in the Church, in the culture and in our country. By the grace of God The Bible in a Year podcast has helped hundreds of thousands to rediscover a biblical worldview – one of hope in God’s love and Divine will,” said Fr. Mike, chaplain for the Newman Center at the University of Minnesota-Duluth and director of Youth and Young Adult Ministry for the Diocese of Duluth.

About Ascension
Ascension is a multimedia network and the leader in Catholic faith formation and digital content. Over the past 20 years, Ascension has helped nurture the faith of over 10 million people in over 8,000 parishes through more than 50 unique faith formation programs and the Ascension Presents media platforms. The Ascension Presents YouTube channel boasts 600,000 subscribers, 88 million total views, and is the largest Catholic YouTube channel in English.