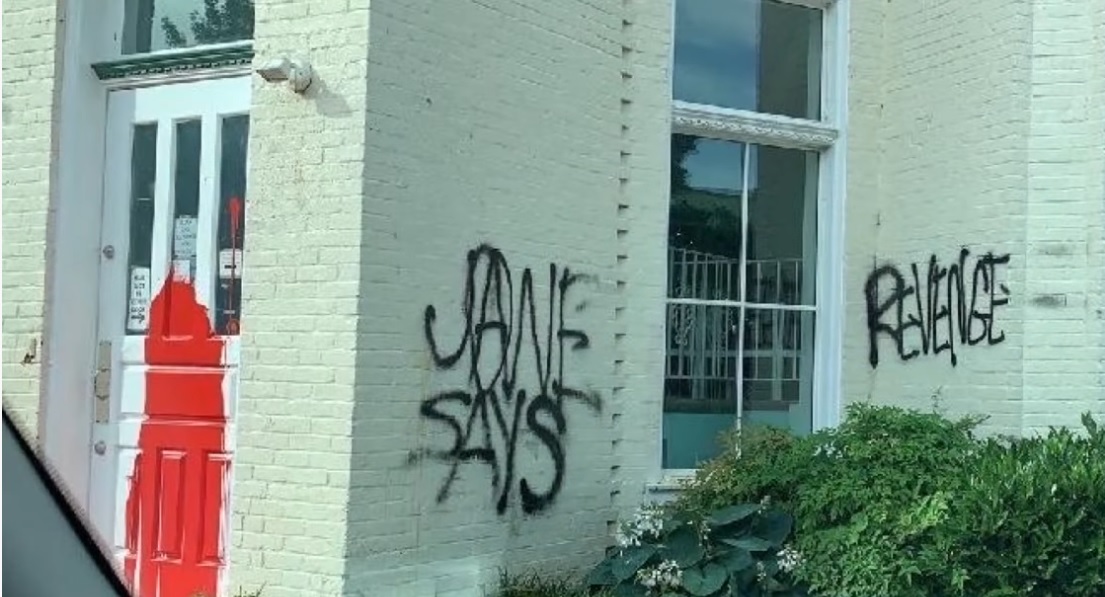 As president of the nation’s largest Catholic civil rights organization, I am requesting that you immediately deploy the full resources of the Department of Justice to apprehend and prosecute domestic terrorists who have recently attacked Catholic individuals, vandalized Catholic churches and torched Catholic-operated crisis pregnancy centers.

We have witnessed a rash of vandalism against Catholic churches, firebombings of crisis pregnancy centers (many of which are run by Catholics), Masses being interrupted, illegal protests outside the homes of Catholic Supreme Court Justices, and an attempted murder of one of the Catholic Justices. While there are several groups involved in these attacks, none is more dangerous than Jane’s Revenge.

Jane’s Revenge is a domestic terrorist group, par excellence. Recently formed, it brags about blowing up crisis pregnancy centers. Worse, it is calling for a “Night of Rage” on the day the Supreme Court is expected to overturn Roe v. Wade.

Jane’s Revenge made its first public statement on May 8, following the firebombing of a crisis pregnancy center in Madison, Wisconsin. It demanded that these facilities be shut down, pledging to destroy them if they remained open. It ended by saying, “We are not one group, but many. We are in your city. We are in every city.”

It was on May 30 when it issued its “Night of Rage” threat. “On the night the final ruling is issued,” it said, “we are asking for courageous hearts to come out after dark.” It said it had chosen “a time of 8pm for actions nationwide to begin, but know that this is just a general guideline.”

On June 14, Jane’s Revenge issued another online post, citing operations in 16 cities, as well as in “countless locations invisibly.” Saying that “it’s open season” on “anti-choice” groups, it pledged to “never stop, back down, slow down, or retreat.” It sent a message to pro-life entities saying, “Eventually your insurance companies, and your financial backers will realize you are a bad investment.”

On June 16, it said it would continue to destroy crisis pregnancy centers like the one in the Minneapolis-St. Paul area.

Reportedly, the Bureau of Alcohol, Tobacco, Firearms and Explosives is investigating Jane’s Revenge. The Department of Homeland Security’s National Terrorism Advisory issued a statement on June 7 saying, “The United States remains in a heightened threat environment,” noting that “faith-based institutions” are among those being targeted.

On June 16, the FBI admitted that it is investigating these attacks on pro-life and faith-based institutions, though it did not say which groups it is probing. Assumedly, Jane’s Revenge is at the top of its list.

We have learned, from credible sources, that there is a link between Jane’s Revenge and Antifa, the far-left anarchist group. Their modus operandi and goals are very similar. Together, these two loosely organized terrorist groups pose a grave threat to democracy.

Sixteen senators wrote to you on June 7 asking for information on what the Justice Department is doing about these attacks. I applaud them for their interest, but we are beyond the point where data gathering is sufficient. We have now reached the stage where probes are academic. The clock is ticking.

We need aggressive action against those who have not only taken credit for violence across the nation—they are pledging to engage in more of it. Jane’s Revenge fits the bill in both instances. The “Night of Rage” that it is threatening must never be allowed to commence.

Please take immediate action to see to it that these threats never materialize.