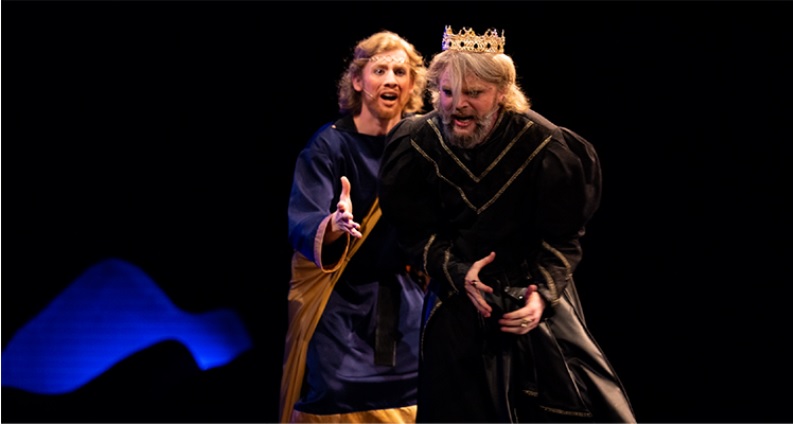 “Speak Lord, your servant listens.” The closing line of the Corban Theatre Department’s adaptation of The Tragedy of King Saul, punctuates the entirety of the narrative. Inspired by the words of the prophet Samuel, found in 1 Samuel 3:10, and voiced by David in this production, the theme of hearing and mis-hearing voices, whether the voice of God in the case of David, or the cacophony of voices found in Saul’s scenes of madness, echoes throughout the play.

The adaptation is a bold attempt at peering behind the curtain of the biblical text of 1 Samuel, creatively exploring the inner thoughts, emotional nuance, and psyche of biblical characters whose motives are so rarely considered or explored in such human terms.

The play, an English translation of Vittorio Alfieri’s original eighteenth-century work, Saul, has been carefully and thoughtfully adapted by Director Jeremiah Price. While the content and tone could not be further from Price’s most recent Corban production, the delightfully witty staging of Oscar Wilde’s The Importance of Being Earnest, the experience offers the audience incredible impact and artful introspection.

Price has introduced a classical Greek chorus to the narrative, a mix of exposition, song, and psalms, presenting a consistent voice that is at times unifying, and in others, intentionally destabilizing, mirroring the theme of madness present in the play. The result is an interesting mix that joins ancient and modern. The careful adaptation represents months of collaborative work for Price and his cast. “I’ve never been a writer, only a director,” Price says, “but I felt like the Lord really guided this adaptation.”

The impetus to take on such a large amount of work stemmed from the desire to see biblical narrative brought back to life on the Psalm Center stage. The Tragedy of Saul represents the first biblical account that Corban has staged since Esther back in 2006. The result is something meaningful, and even for audiences that do not typically gravitate towards tragedies, offers a unique experience and a rich picture of what the real-world emotions of King Saul and the biblical cast might have looked like.

This is where Corban’s talented actors bring the narrative to life. Brycen Common’s portrayal of Saul gives us a window into the tortured mind and soul of a king nearing his demise. Common carefully holds the tension of Saul’s moments of lucidity and insanity in the play—a balancing act that drives the plot forward while also delivering some of the play’s starkest philosophical moments. For audiences familiar with Shakespeare, Saul will evoke the tragic figure of King Lear set against a backdrop similar to the maddening internal struggles found in Macbeth. But Corban’s production finds a new space that is all its own as the king, once eager to hear the voice of God, descends into self-inflicted madness, his mind clouded by the cleverly staged and entirely eerie chorus that often represents his internal thoughts in Price’s production.

The rest of the cast plays the counterpoint to Saul’s madness, making real the passion of Michal (Noelani Eley), the sober thoughts of Jonathan (Quinn Coomer), the steadfastness of David (Noah Linhart), to create a living narrative that will cause the audience to consider the real, human consequences found in the biblical story.

A departure from Alfieri’s originally, sometimes heavy-handed, tragedy, Price’s production does not leave the audience in despair, but opts instead to pattern the biblical narrative, ending with the divine transition to Israel’s greatest human king, dressing the stage with symbolism of the coming Messiah patterned in David’s humility and steadfastness throughout. The chaotic madness of Saul, his clouded thoughts and tired mind, fades away to the clarity and order of David, who inclines his ear to the voice of the Lord above all others.

For those considering attending, don’t let the unfamiliarity of this title or its heavy tone dissuade you. Corban’s production of The Tragedy of King Saul is thoughtful, with moments of humor interspersed, and a real win for theater fans. It is an innovative reinvention of an ancient story that provides a fresh take on classical tragedy and the narrative of 1 Samuel itself.