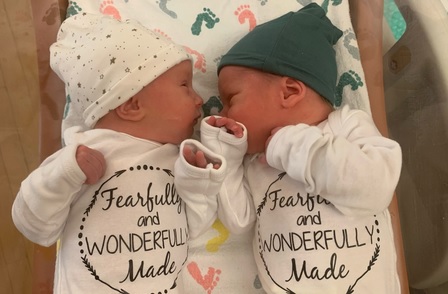 KNOXVILLE, Tenn., Nov. 21, 2022 /Christian Newswire/ — Two babies in the Pacific Northwest, whose births were facilitated by the National Embryo Donation Center (NEDC), have made history with their arrivals. Siblings Lydia Ann and Timothy Ronald, the daughter and son of Philip and Rachel Ridgeway, each spent nearly 30 years as embryos frozen in liquid nitrogen prior to being thawed earlier this year. When they were born on October 31, 2022, they set the new known record for the longest-frozen embryos to ever result in a successful live birth, according to research staff at the University of Tennessee Preston Medical Library.

The Ridgeways’ births of twins frozen for essentially three decades (29 years, 10 months, to be exact) breaks the previous record set by another NEDC couple, Tina and Ben Gibson, of over 27 years.

“Thirty years ago, the living Christ gave these children life, and He has been sustaining that life ever since,” said the Ridgeways. “This is His story, and we are so thankful to Him that in His providence He is allowing us to be a part of it.”

“I have been working in the field of infertility for over 25 years, and yet these embryos were frozen while I was still in my training as an Ob/Gyn resident at Stanford. It just boggles the imagination,” said Dr. Gordon. “The decision of Rachel and Philip to adopt these embryos should reassure patients who wonder if anyone would be willing to adopt the embryos that they created 5, 10, 20 years ago. That answer is a resounding yes!”

“I’m honored to have played a part in bringing the world record-breaking babies to their family. A big congratulations to Rachel and Philip!” said Atkinson. “We’re so grateful to our donor families for their gift of these precious snowflakes. People donate for various reasons, but the end result is giving the gift of hope, love, and a chance at carrying a baby. These two frozen superstars were created nearly 30 years ago, just waiting on ice (liquid nitrogen, actually) for their family to come find them.”

“The NEDC has been fortunate to facilitate and break numerous world records in our field,” said NEDC President & Medical Director Dr. Jeffrey Keenan. “We hope this news will encourage others to experience the blessings of embryo adoption for themselves.”

The faith-based NEDC is the world’s leading embryo adoption program, with more births facilitated (more than 1,250) through embryo adoption than any other organization or clinic. Its mission is to protect the lives and dignity of frozen embryos by promoting, facilitating, and educating about embryo donation/embryo adoption. The NEDC’s website is www.embryodonation.org.