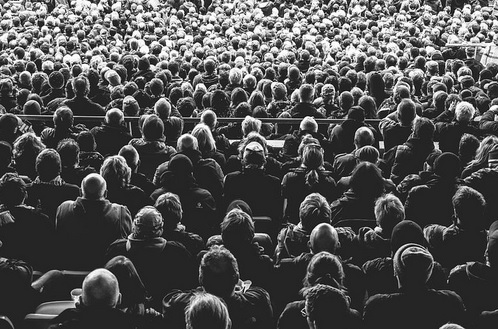 I confess I grow weary of some believers’ responses to good news, especially related to evangelism. Instead of believing the best, as believers sometimes we seem to chronically believe the worst.

I remember the negative responses I received years ago when I shared a follow-up report on my Facebook about “Harvest America,” Greg Laurie’s crusade in Texas. AT&T Stadium was filled to capacity and a few thousand were even turned away. Over 6,000 came forward to accept Christ, plus who knows how many more in the over 6,000 host sites that broadcasted the event.

One commenter responded: “I’m ALWAYS skeptical about these. How does the church follow up on thousands? If you don’t follow up and turn them into true disciples, we now have a massive amount of people walking the planet with a false sense of salvation.”

As is true in any public event or any local church profession of faith, or with people I’ve prayed with at retreats or in restaurants, there will always be those who aren’t really regenerated. Likewise, there will always those who WILL be. That was always true not only of the Billy Graham crusades, but also of Jonathan Edwards, George Whitefield, John Wesley, and D. L . Moody revivals. Some of those professing faith will not prove to be real believers bearing long-term fruit. But I have met countless truly regenerate people, including a godly elder at my own church, who say they came to Christ when going forward at a Graham crusade. Who am I to question God’s work in their lives?

(Crusades aren’t as common anymore, but everything I say about them in this blog applies to all large-scale evangelism. And I frequently hear skepticism when it happens, so this is still relevant.)

Here’s some other genuine believers who placed their faith in Christ at crusades:

Someone wrote on my Facebook page, “My mother, in 1950, went forward when [Billy Graham] was in Portland, that changed our family forever.” Many of the stories and results of lives changed we won’t know about until eternity. I think one day we’re going to be surprised at how powerfully God worked in the lives of people when many of us were skeptical about the results. (See also 7 Lives Changed at Billy Graham’s Los Angeles Crusade.)

Greg Laurie preaches the core Gospel message, and attempts are made to align all professing converts with local churches. There are thousands of churches that have participated in the Harvest Crusade. So could each church follow up one or three or five or ten people? Of course. Those are not impossible numbers. So many who profess join a church, are baptized and discipled, and become true servants of Jesus. Many others don’t. If there are tares, OK; but there is also much wheat.

I agree that assurance of salvation is a doctrine that mainly applies to proven believers, and it should not be given indiscriminately to those who bear no fruit of the Holy Spirit’s presence in their lives. As for 6,000 conversions being doubtful at that 2016 crusade, there were also 6,000 churches showing the gospel presentation broadcast live from Arlington. Suppose “only” 1,000 conversions in Arlington panned out and bore true fruit of an indwelling Spirit and a transformed life. Then suppose an average of only ONE person per church telecasting the event really became regenerate. Personally, I’m confident it was a lot more than that, but even if that were “all” it was, the number of conversions would be 7,000.

In Acts 4:4, the Apostles rejoiced at the 5,000 who appeared to be saved, plus family members. I assume a number of those probably didn’t pan out either. But that’s always true, whether someone believes in Christ while alone, with just a friend or a small group, at a church, or at an evangelistic crusade. The point is that some conversions are false and some are real. That’s nothing new. No one knows which will prove which, and no one is being asked to rejoice in false conversions, but to rejoice that the Gospel was preached and that many conversions will ultimately prove true, even though no one but God knows yet which are which. This is true regardless of the ultimate numbers, which I suspect were way more than 6,000 given the number of churches involved.

Paul says, “What then? Only that in every way, whether in pretense or in truth, Christ is proclaimed, and in that I rejoice. Yes, and I will rejoice” (Philippians 1:18). If we are to rejoice at the preaching of the Gospel even when some preachers are pretending, are we not to rejoice at the response to the Gospel even if some who come forward are not truly regenerate? The point is some are and perhaps many are. Time will tell, and God, not we, will be their Judge.

In an interview, Greg Laurie addressed those who criticize the use of evangelical crusades to proclaim the gospel:

…in a day when Gen-Xers prefer more intimate relationships to crowds, mass evangelism has plenty of critics. Laurie has heard all of the reasons why he shouldn’t do it.

Sometimes I get criticism after preaching my heart out and challenging teenagers to put their faith in Jesus, “Well we need to make sure our teens don’t just make an emotional decision.” I believe that this thinking is flawed theologically.

Read about the sinful woman (Luke 7:36-50) and the Philippian jailer’s (Acts 16:29-32) decisions for Christ. They had lots of emotions before and after they believed. I remember the emotions I felt on June 23, 1974 when I heard the gospel clearly for the first time and believed!

Jesus said, “There is rejoicing in the presence of the angels of God over one sinner who repents” (Luke 15:10). So Heaven’s inhabitants do rejoice at every single true convert. I join Heaven in rejoicing over all those who have come to Jesus, anywhere, any place and any time. God will sort out the wheat and the tares. “Let both grow together until the harvest, and at the time of harvest I will say to the reapers, ‘First gather together the tares and bind them in bundles to burn them, but gather the wheat into my barn’” (Matthew 13:30).